As a branch of the WBA Supporters’ Club, the Society has the honour of choosing an Albion Player of the Year to be presented at the Supporters’ Club’s end of season dinner. This season, the membership voted for James Morrison.

Society Captain, Martin Grange, made the presentation of an engraved crystal trophy together with a Society shirt embroidered “Mozza”. 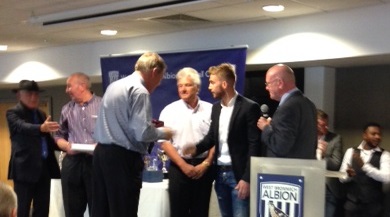 Also in attendance, was exiled Baggie, Paul Whitehouse. Paul is an old friend of Society member, Ashley Hayward, and the two were reunited at the Chelsea home game on 18th May. The last game they had attended together was the 1968 FA Cup Final before Paul migrated to Australia in 1970. Paul has remained an avid Baggie despite the distance to the Hawthorns! 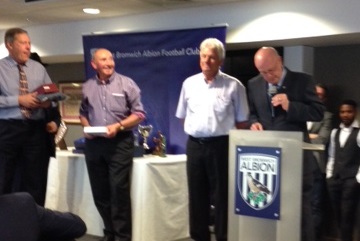